In our lab in the Department of Neurobiology at Harvard Medical School, we worked for many years with non-human primates (NHPs) on a wide variety of questions, including neuronal mechanisms of attention, inference and flexible coding in parietal cortex; economic decision making in orbitofrontal cortex; and movement initiation in the basal ganglia-thalamic-cortical circuits. A few years ago, we switched to mice, to take advantage of the incredible genetic tools available in that species. Or lab uses a combination of electrophysiological, behavioral, optical and computational approaches.

We are currently focusing on neuronal mechanisms involved in the initiation of voluntary movement. We and other animals often make movements in response to external sensory stimuli (e.g., reflexes) -- and in fact, the vast majority of studies of the motor system have focused on such “reactive” movements. But we also have the subjective sense that we can move without obvious external prompting. These self-timed movements cannot be easily traced to external stimuli; rather, they are somehow initiated or willed “from within”. But why do we move when we do? Imagine reaching for a cup of coffee on your desk – why did you move at exactly that moment, and not a second earlier or later? What goes off in the brain to trigger such self-timed movements? Not only is this a fascinating (and ancient) philosophical question, it is important clinically. Patients with movement disorders such as Parkinson’s disease often can readily execute reactive movements, but struggle more with self-initiated movements. Understanding the neuronal mechanisms of self-timed movements can thus shed light on movement disorders in addition to basic mechanisms of motor control.

We have trained animals in self-timed movement tasks in which the animals choose when to move. Under such conditions, we previously observed “ramping” neural activity in NHPs, both in basal ganglia and cortex, in which neural activity gradually ramps up toward the time of movement. Moreover, the slope of ramping from trial-to-trial is informative of the time to move, with steep slopes resulting in earlier movements, and shallower slopes related to later movements. In mice, we have also observed such ramping activity during self-timed movements – but now we are able to use modern genetic tools to address neuronal mechanisms in more detail. Current experiments in the lab involve 1) examining the role of endogenous (and exogenous, optogenetically-induced) activity of midbrain dopamine neurons in self-timed movements; 2) examining the role of striatal neuron subtypes and basal ganglia output neurons in self-timed movements; and 3) using optogenetic inhibition as a strategy to identify brain areas that are involved in the generation of voluntary movements, as opposed to simply relaying or modulating signals from movement-generating areas. Our overarching goal is to elucidate the fundamental neuronal/circuit mechanisms of movement initiation.

Left: Coronal section of mouse brain showing bilateral fiber optic placement over the Substantia Nigra pars Compacta. Right: Optical recordings (fiber photometry, using the genetically-encoded calcium ion indicator GCaMP6f) made from midbrain dopamine neurons (DANs) in mice, as the animals execute a self-timed movement (lick task). The animals received a brief start-timing cue at time zero (visual-auditory),and then had to self-time the movement. if the animals waited 3.3 s before licking, they received a liquid reward; if they moved earlier they were not rewarded and the trial aborted. The point is that the movement times are highly variable, allowing us to ask what is different in the DAN activity when animals happen to move earlier or later on a given trial. Data are binned and averaged separately depending on when the animal moved, given by the different colored traces. The averaged activity showed clear "ramping" pattern, with activity increasing gradually over seconds up until the time of movement. Moreover, the slope of the ramping activity (as well as the previous baseline activity at the time zero and earlier) is highly informative of the time to move, with steep slopes preceding earlier movements and shallower slopes preceding later movements. From Hamilos et al., eLife 2021. 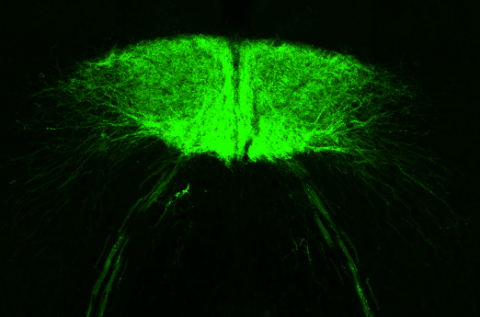 Right: Fluorescence image of the hypoglossal nucleus in a ChAT-cre transgenic mouse. Medial and lateral branches of the XII cranial nerves are visible extending from the bottom of the nucleus. Our lab is investigating the neural mechanisms of initiation of voluntary movements, using licking as a model motor behavior. Our experiments, combining behavior and optogenetics, are designed to isolate movement "drivers", where initiation signals are engendered, from movement relays, which pass (and condition) signals form initiators ultimately to skeletal muscle. These experiments are complemented by multiunit electrophysiological recordings from putative driver areas to understand neural dynamics underlying movement initiation. This project is being carried out by PhD student Eden Sayed, with help from postbac fellow Jabari McGinnis.

Copyright © The President and Fellows of Harvard College